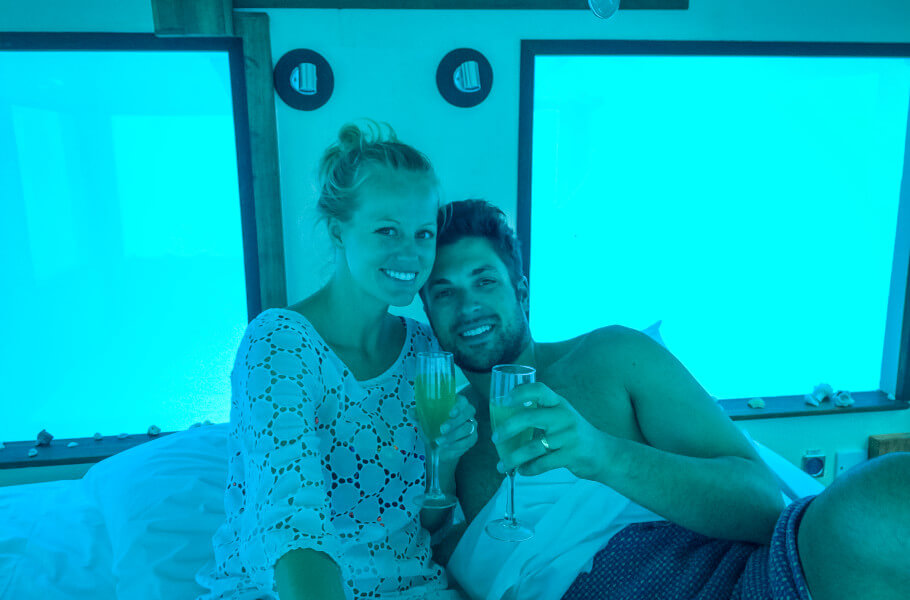 Ahhhhh. The famous “underwater room” that captured my heart on Pinterest and put Pemba Island and the Manta Resort on my radar as a honeymoon option.

We decided to go to Africa for our honeymoon because of this room… and I’m pretty sure when people ask about our trip, all they really want to know is: “What was the underwater room like??”

So in today’s post, I am going to do my best to tell you.

The Manta Resort has one Underwater Room, which is actually a three leveled structure, built about 250 meters off shore. It’s situated in the “Blue Hole” surrounded by a beautiful reef. Since being built in 2013, coral has started forming on the sides of the room and on the ropes that anchor it, which has attracted a loyal bunch of curious fish. But I’m getting ahead of myself.

We’d been at Manta for about a week, when they told us that the next night would be a good night for the Underwater Room. The staff at Manta keeps an eye on sea conditions, and makes sure that they schedule guests for the best times. That morning we packed up just enough for 24 hours away, leaving everything else safely in our villa. I was relieved to discover that we didn’t have to check out of our bungalow to stay in the underwater room. We took a boat out there around 2 p.m. with a cooler stocked with drinks and snacks. A fruit platter awaited us, as did a few board games and all of our snorkeling gear. 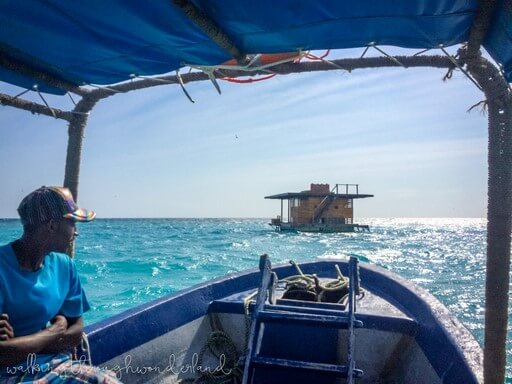 Our wodnerful service fundi gave us the full tour. The sea-level platform has a toilet, open air shower and refrigerator in the back. In the front it has a U-shaped couch surrounding a table, where we set up the chess board and played for hours that night. 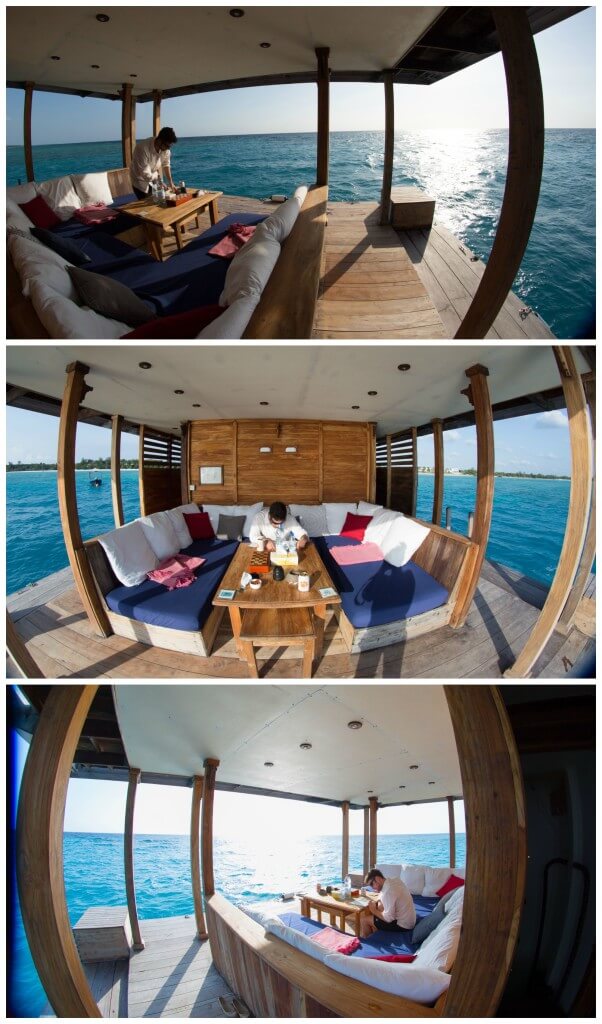 You take a set of stairs up to the top level where a daybed, lined with shells, makes for the world’s best sun worshipping spot. And then, after you have fallen in love with the top two decks… they take you down to see “The Underwater Room”.

There are no stairs. No. Instead, you climb down a ladder. As soon as your feet pass the five-foot down mark, they start glowing turquoise. A few more feet down and suddenly your whole world is glowing. And then: you are there. IN the famous Underwater Room. Our fundi handed us a cell phone with numbers to call back to the resort if we needed anything and then he ascended the ladder and left us to enjoy our own private reverse-aquarium. 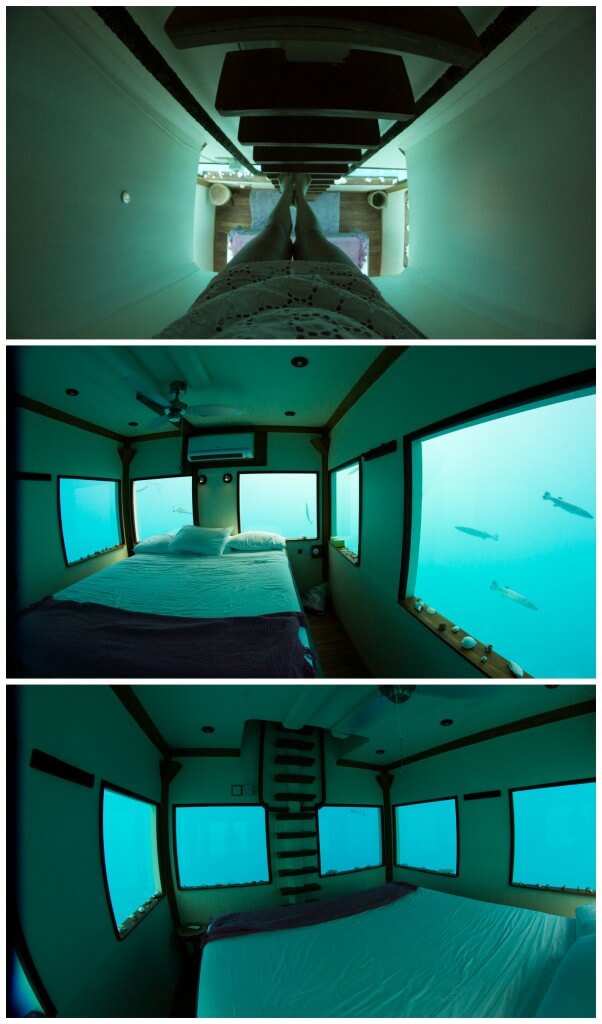 We spent the first hour or so marveling that it really isn’t so bad to be in a fish bowl, as schools of redfish, barracuda and bat fish swam circles around us. A curious little lion fish was never more than a few feet away from the glass. 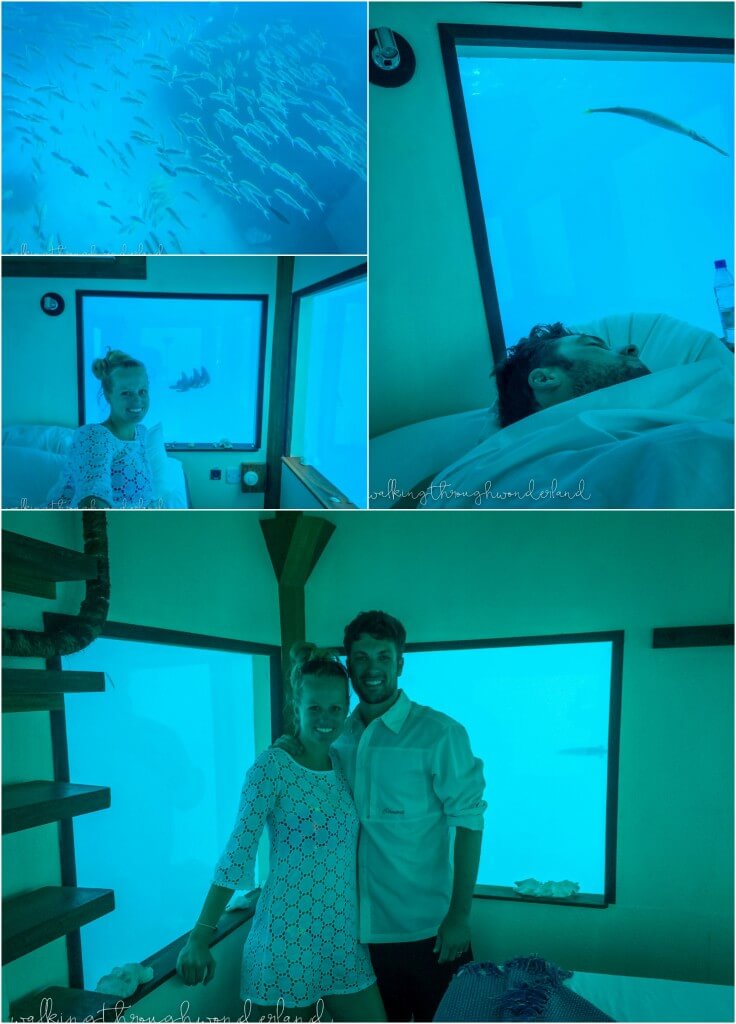 After a while, we emerged and headed up to the roof top to enjoy a drink and get a little sun. That lasted about 15 minutes before Dane decided he needed to get in the water to fully explore the underwater room from the outside too. 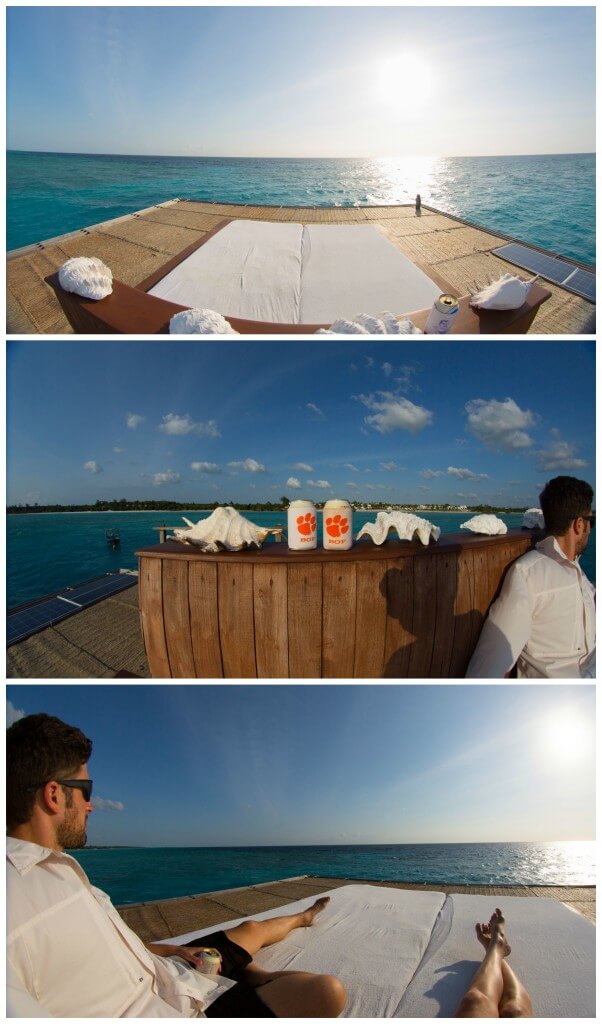 We’d heard that some people get dreadfully seasick during their Underwater Room stay. Both of us have spent a lot of time on boats and never really had a problem, but we happily took some of the dramamine Amanda offered us– just in case! We got lucky. I actually found the rocking of the structure soothing. 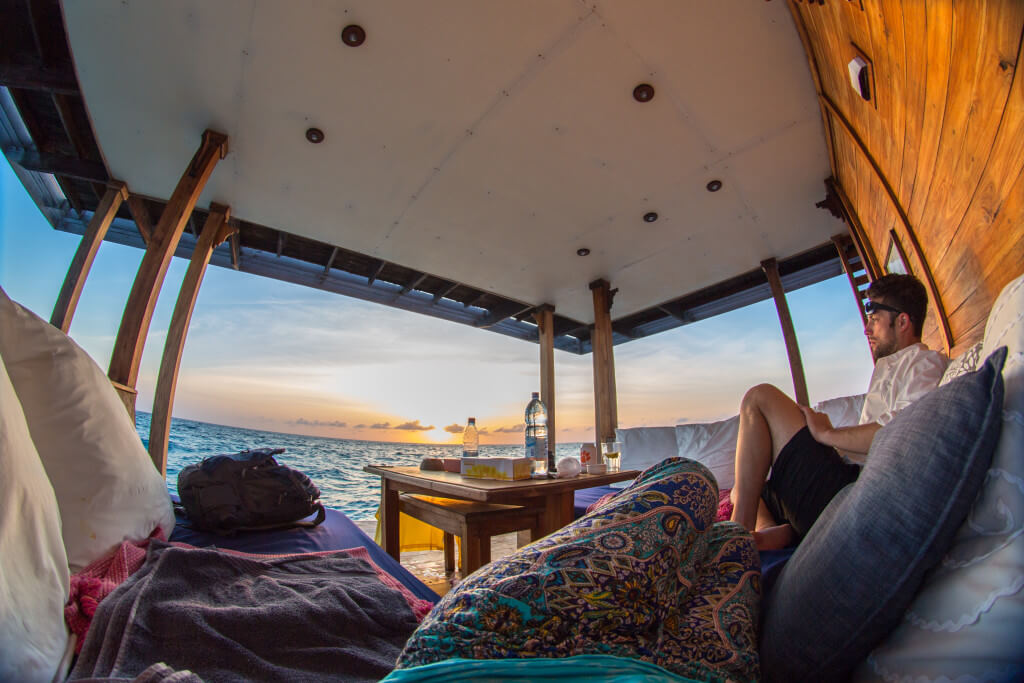 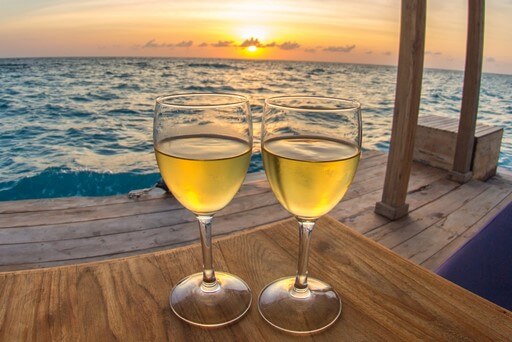 We had sunset drinks on the main deck, and just after the sun went down, we had dinner delivered to us: a fabulous seafood feast complete with lobster, squid and large filets of fresh fish. When it was good and dark out there, we turned the lights on around our room. Suddenly the whole sea seemed to glow and fish were coming from every corner of the reef to check us out. We finished our last game of chess, spent about an hour on the rooftop looking at the stars, and then descended into our reverse little aquarium to sleep. 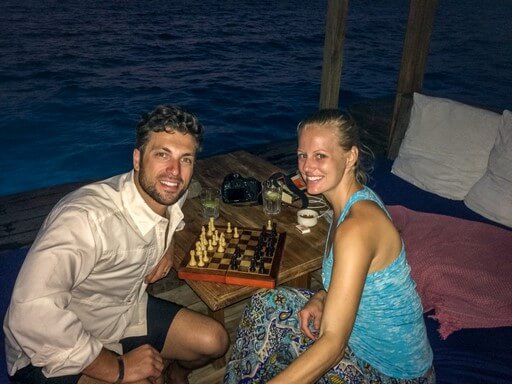 The next morning we emerged from our aquarium to find a bottle of champagne delivered with our breakfast. 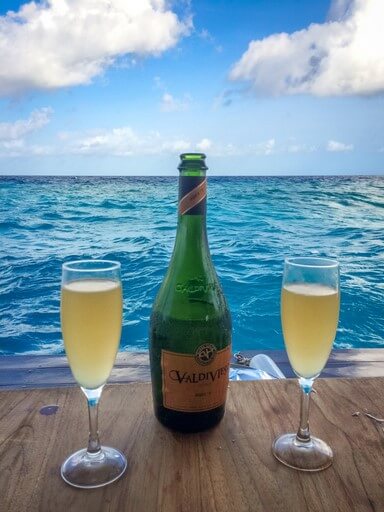 The waters were choppier that morning than they had been the night before, and waves lapped at the sides of the main level, every once in a while rolling across the deck. We ate breakfast, then went back downstairs to sip mimosas in bed. 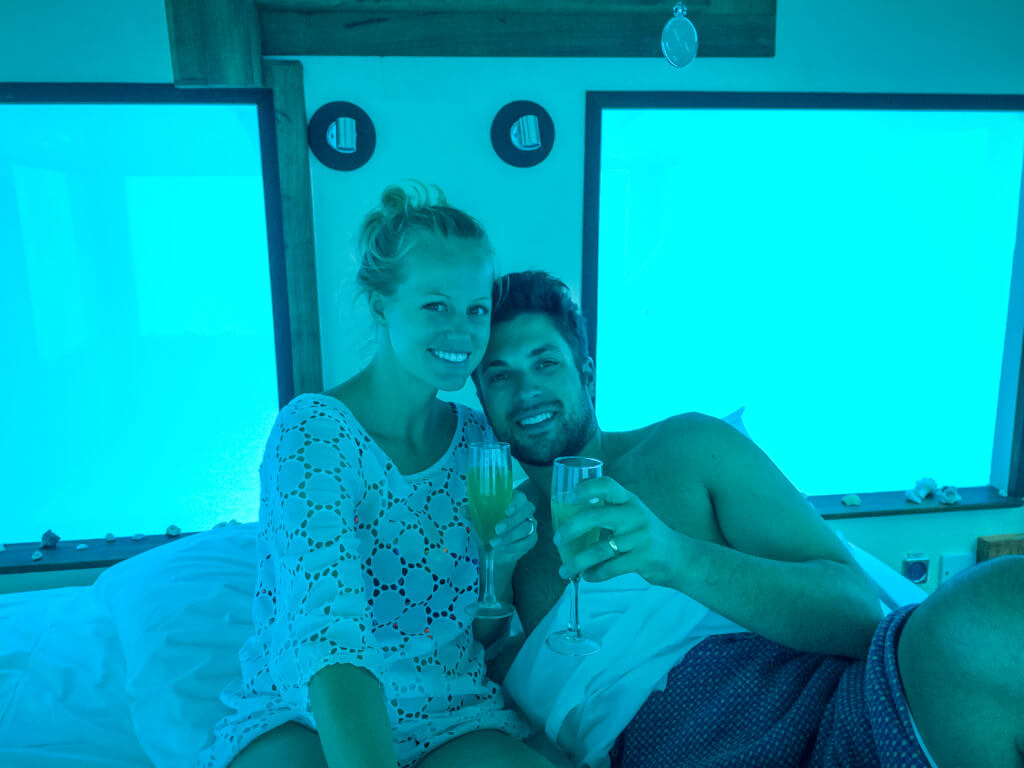 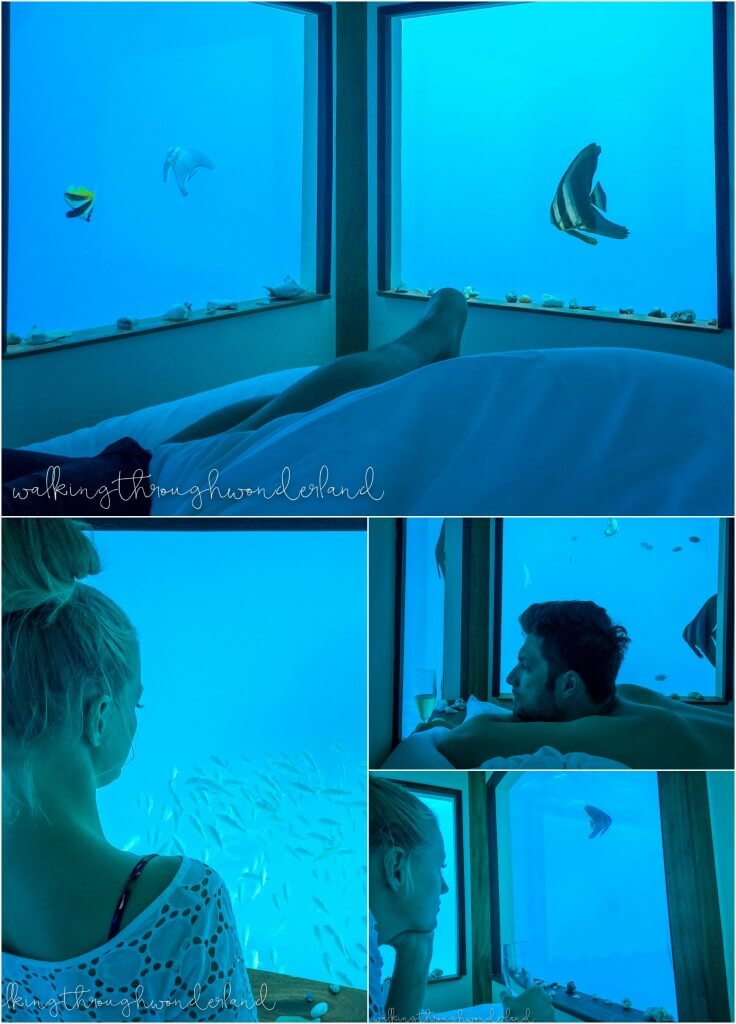 Later that morning we saw all of our friends out for a dive, and I was thrilled when David, the dive master, offered to take some pictures for us from the outside looking in. I’d told him earlier that week that I would love a few shots like that and he was happy to oblige, although normally the divers give you a respectable distance. 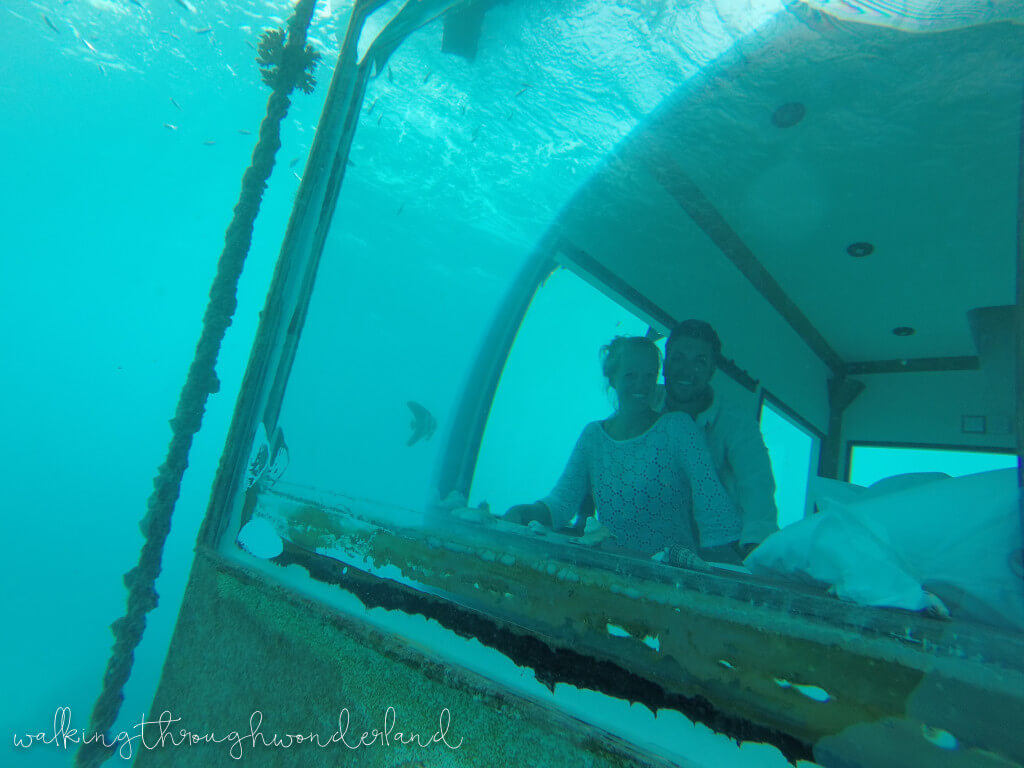 Part of me wished we had one more day, although, another part was ready to get back to the resort. The massages. The diving. The pool. The friends we’d made. One can only play so much chess with one’s spouse alone at sea. 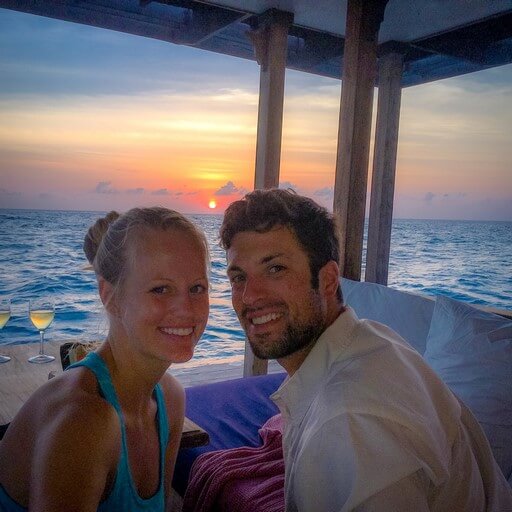 Manta is a small resort, so you get to know your neighbors. We were there for 10 days, and during that time there were only two other couples who had arrived there before us and stayed longer: Amanda and Alan and a nice German couple. Everyone else that came and went stayed for anywhere from two to five nights. I would say about 1/3 of the couples that came through stayed one night in the underwater room. One couple spent two nights out there.

In my opinion, (and the opinions of every one else who stayed out there), one night is just about enough. It’s a once in a life time experience, but once in a life time leaves you feeling like you can put a check mark on your bucket list. I’d recommend Manta’s Underwater Room to anyone who doesn’t get seasick easily, but I’d also remind them that if you are expecting bling, bling: you will be disappointed. It’s amazing and unforgettable and well worth the cost- for one night. But once you’ve slept surrounded by fish, it’s nice to take in the view back at the Manta Resort.