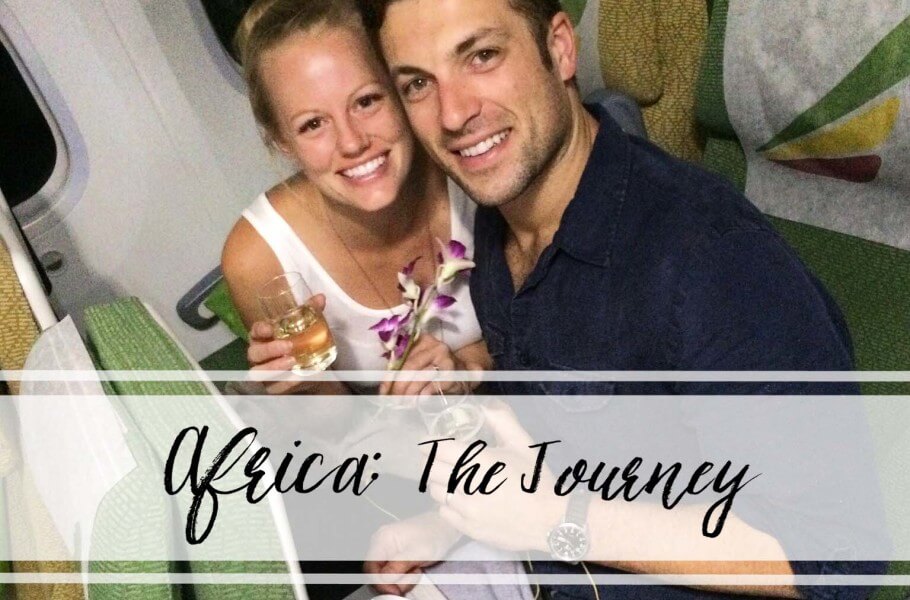 For the story of how and why we picked Africa for our honeymoon, click here. Okay, now that we are all on the same page that I have never been more excited about a trip in all of my life… let’s finally start talking about this trip! In today’s chapter, let’s talk about how we got there.

Getting to Africa is neither quick nor easy from anywhere I have ever lived. But this was our honeymoon, and we weren’t looking for “easy” when we booked it. If I had any guarantee that at some point we would be living in Europe, it’s likely that we would have waited to take this trip until then, but since there is never any guarantee on where we are going next: the time was now.

As soon as we arrived at the airport in Naha- the celebration commenced. We flew from Okinawa to Tokyo via Jetstar for about $150 each. 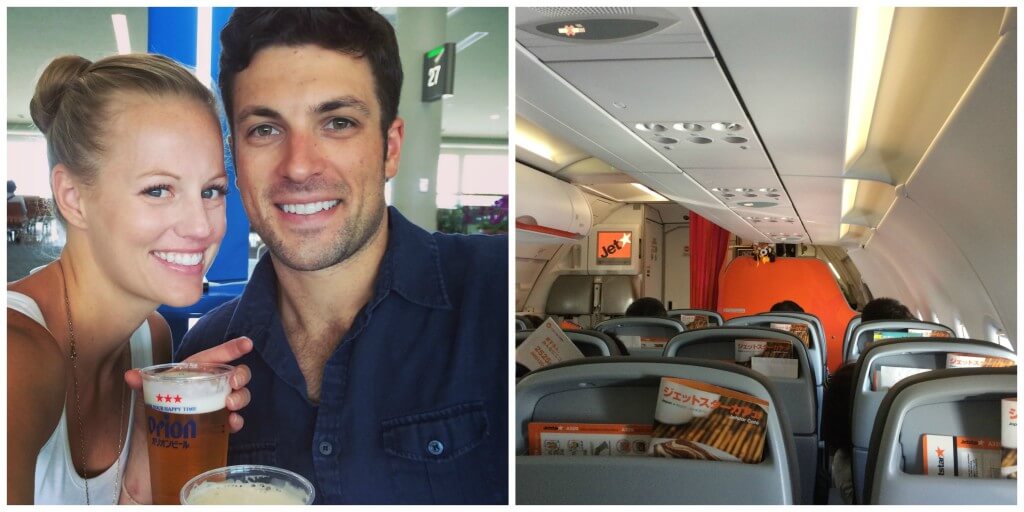 Once in Tokyo we flew with Ethiopian Air for the rest of the trip, this cost a little bit more. We flew Tokyo to HongKong; HongKong to Addis Ababa (Ethiopia); from Addis Ababa we were supposed to fly directly to Kilimanjaro, Tanzania but we found out (after we boarded the plane) that we were going to be stopping in Mombasa for yet another quick layover before finally arriving at our destination: Kili. For those of you who are counting: that is five flights- and it was about as direct as we could find from Okinawa.

Our flight from Tokyo to Hong Kong was brilliant. We were in the front of and almost empty plane and had the row to ourselves. Plus… they knew it was our honeymoon (partly because of my MRS. earrings, thank you, Kim Delaney) so they kept the champagne and desserts coming throughout the trip. It was like first class without the $10,000 price tag. (Not kidding- we looked into it just for fun and it would have cost us over 10 grand. For 10 hours. Ridiculous.) 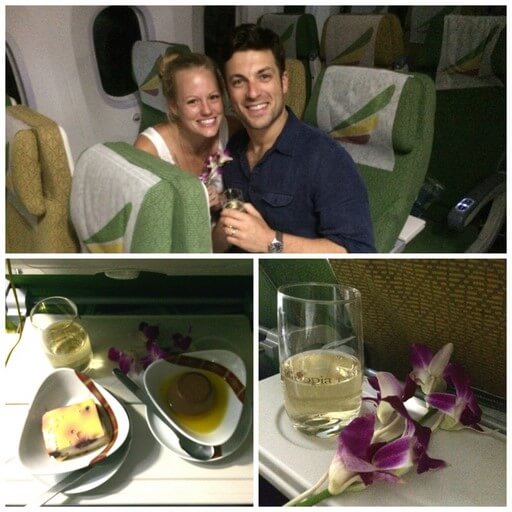 In Hong Kong we kept our fingers crossed as busload after busload of new passengers boarded our plane bound for Africa. I was feeling territorial of our row, as I sat in the middle seat next to Dane and tried to avoid eye contact, like somehow this would make it less likely that the number 12A was on anyone’s boarding pass. Hong Kong to Addis Ababa is a little over an 11 hour flight. I hadn’t slept on the Tokyo to Hong Kong leg because I was saving all my sleepiness for this next leg. Finally they moved the jetway back and closed the doors. We could hardly believe our luck. Our row was safe!

And then, suddenly, it wasn’t. I think I smelled him before I saw him. Dane doesn’t like me to say that. But… every traveler out there knows what I am talking about. We’ve all been in this situation at one time or another. You just hope that when it’s your turn to have an extremely pungent seat mate it’s for a 20 minute flight, not an almost 12 hour flight. Or you hope you are on a bus or a train where you can crack the window. You don’t mean to judge, you just can’t quite help it. Brush your teeth people. Shower. And for heaven’s sake wear clean clothes. Sorry for the rant, but do you see where this story is going?

After everyone had stowed their luggage, we noticed a man walking back toward the front of the plane, pointing at our window seat and signaling for us to get up. Oh please! Anyone but him, I thought as I smelled him from 6 rows away. It was too late to move to the window seat to pretend it was mine, and I had no concrete way of knowing that he wasn’t actually assigned to 12 A, but deep down I just knew. He’d seen the empty window seat at the front of the plane and decided to trade his middle seat in the back. I desperately wanted to ask him if I could see his boarding pass, to somehow prevent him from taking our vacant seat, but with one glance at Dane (who deeply hates awkward social interactions) I knew it wasn’t worth the fight. He took the window. And I sat sandwiched between him and my husband, trying to face sweet smelling Dane as much as possible.

It’s funny how a smell can cling to you. The next day when we arrived in Addis Ababa I wanted nothing more than to brush my teeth and blow the smell from my nose. I made a beeline for the bathroom when we got off the plane, planning to thoroughly wash my hands and arms and face. Now, I knew before we deplaned that the Addis Ababa airport was not going to feel like the Tokyo airport. I wasn’t expecting clean white tile or self sanitizing Japanese toilets. However, I was also not expecting what I encountered in the bathroom.

The prayer tent is located directly outside the bathrooms and it is customary for Muslims to wash their feet before they pray. I’ve visited a lot of places in the world that have small drains and hoses conveniently located outside prayer tents specifically for this purpose. Addis Ababa, however, is not one of them. I walked in to the bathroom, and watched two women washing their feet in the only two sinks. Brown water streamed down their arms and dripped off of their elbows puddling on the ground. I smiled. They smiled. I took a deep breath. Sandy dirt remained in the shallow sink and all over the counter after they left. Another woman stepped up and raised her right foot into the sink as I stood there, surveying the scene. I changed my mind about brushing my teeth.

Half of me wanted to cry, because I was exhausted, I couldn’t clear the smell from my nose (even after deeply inhaling hand sanitizer), and I still had half a day of traveling in front of me. That same half wanted someone to be angry at… and since I can’t get angry at strangers, I realized there was a good chance it was going to be my sweet, unsuspecting husband. I wanted to whine to him that we were supposed to be on a glamorous honeymoon, and I felt about as glamorous as a greasy bucket of fried chicken. But then I caught sight of him outside the bathroom. He’s spent about half of his adult life in the Middle East, and his look told me that he hadn’t expected to hear a call to prayer on his glamorous honeymoon either.

I walked back out of the bathroom, with teeth unbrushed and face unwashed, and shrugged. “Lets get a beer.” It was 9 a.m.

I wish I handled every bump in the road this way, but I don’t. I wasn’t perfect or easy going about everything. In fact, there were tears and terse words on more than one occasion. But every time I got frustrated with the journey, he just reminded me that we hadn’t been looking for the “easiest” honeymoon to get to. We’d known this was going to be a trek, and we had decided it was worth it. We’d wanted an adventure.

“I thought you liked roughing it,” he said at one point as I stood in a line with people who kept elbowing me as they fought for a better position to rush the next plane. All of a sudden it hit me that how I react in these situations is all about my expectations going into them. When I bought a cheap ticket for a train from Bangkok to Chiang Mai I knew it was a real possibility that I would have to step over someone else’s shit on my way to the squat toilet, so I wasn’t as annoyed when I had to. But we weren’t budget traveling, I thought indignantly, about to make my point. We were on our honeymoon…

… And we had chosen to come to Africa. It hit me suddenly and strongly. I was being a complete snot about this two-day journey. I’d like to say “That’s not who I am,” but maybe it’s safer to say “that’s not who I want to be.” I want to handle myself graciously and with kindness when the person who sits next to me doesn’t smell the way I wish they did. I want to be loving toward everyone I meet, no matter the circumstance. I have room to work on oh so many things- and this is one of them. I reminded myself that when we were communicating with the Manta Resort (the place we stayed for the second half of our honeymoon) my favorite line from their communication was: “If you’re expecting bling bling- you will be disappointed.” It was time to reframe some things.

From the time I was a little girl, there has never been anywhere I’ve wanted to go more so than Africa. We’d picked it for our honeymoon, and whether we were budget traveling or not, there were certain things that I needed to adjust in my expectations. This was Africa. And we were in it. And I didn’t know it yet, but we were going to fall head over heels in love with it. 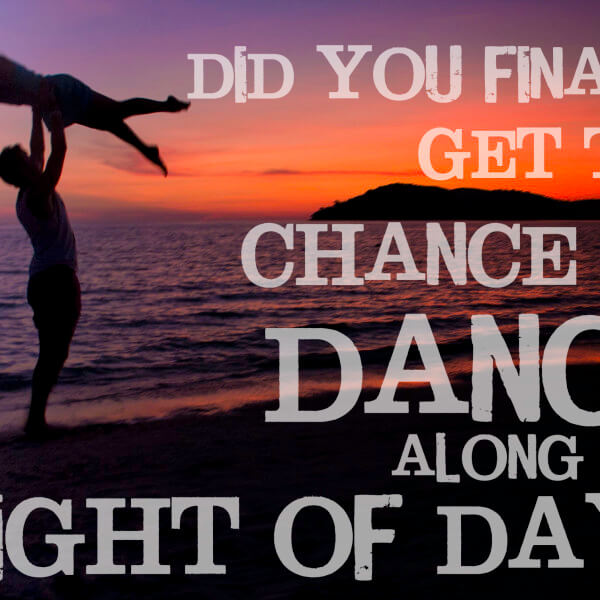