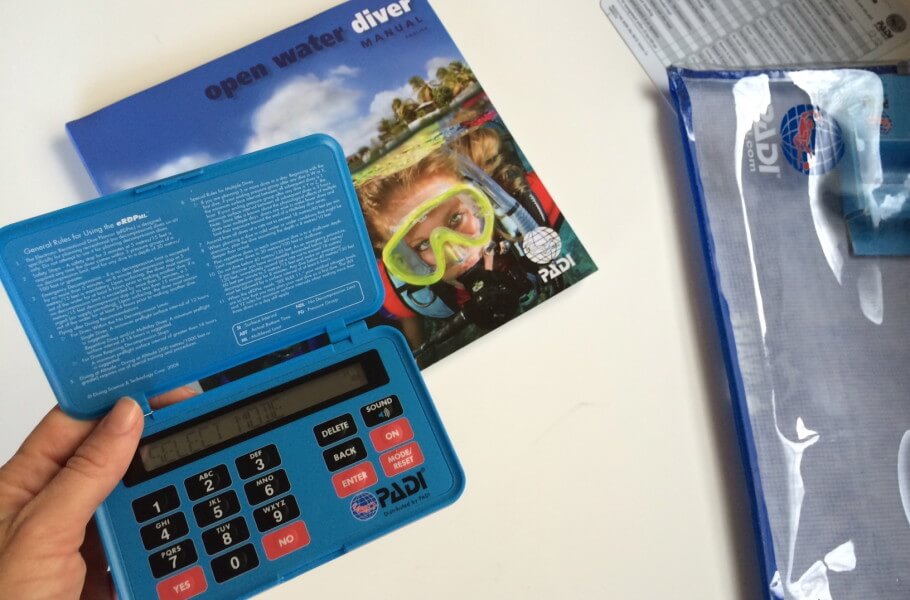 Scuba diving has never been particularly appealing to me. I love to breathe. I know for most people this goes without saying, but I like breathing so much that I often do say it. I even thought about having the word “breathe” tattooed on my wrist once, for about 15 minutes, before I realized how many blonde jokes it would set me up for for the next 60 or so years.

I like activities that promote breathing like yoga and pranyama and … I don’t know… blowing up balloons. To me, the idea of scuba diving always went hand in hand with not being able to breathe, and therefore never interested me even a little bit. I don’t like feeling restrained and I do not willingly enter confined spaces where I might be likely to run out of air. Basically, I don’t like anything that impedes my ability to freely breathe on my own terms. I wouldn’t call myself claustrophobic exactly, but I am claustro-aware for sure.

So when Dane asked me how I felt about getting scuba certified, I answered with very little hesitation: no, thank you. I grew up swimming. Like many Florida babies, I could literally swim before I could walk. We spent our childhood snorkeling around the beach or the backyard pool looking, not for fish, but for those equally exciting neon weighted rings that were a staple in every pool in the early nineties. When we hit 13, a good chunk of my peers got scuba certified. Not me. I just wasn’t interested in scuba diving. Even throughout college, while everyone I knew was getting certified and going on weekend diving trips, I remained comfortably breathing my own air. No tanks for me.

However, Dane is nothing if not persuasive. The more he talked about this giant coral reef in the middle of the Pacific that we were going to be living on, the more I warmed to the idea. He talked fondly about this hobby we would share as husband and wife, as if it was something I had actually agreed to. By the time he started showing me pictures of sea turtles and whale sharks and clown fish, I finally caved and said I would try it. Not necessarily do it, but “try” it. To say I was hesitant is to put it mildly. Right before we paid for the class I warned him, “If at any time I start to feel like I can’t breathe: I will walk away. You will have to finish the class on your own.” I think I hoped he would give me an out now that money was on the line, but he just said, “I think you will be okay,” and swiped the card.

We signed up for a class that started our second week in Okinawa. A typhoon kept us from starting on Sunday as planned, but on Monday we walked into the classroom where one of the first things our instructor said was: “The most important rule of scuba diving is to never, ever hold your breath.” I immediately liked this guy. Clearly I had been misinformed, but I had always assumed that regulating your air would involve a great deal of breath holding. Maybe this wouldn’t be so bad. I took a deep breath and found myself yawning. An involuntary response I have (as it turns out) to conversations that involve breathing. I pretty much yawned through day one and two in the classroom- not because I was bored but because my body decided to start hoarding air while we talked about oxygen tanks.

Day three was our first day in the pool. I had no concerns about the swimming test, (200 meter swim or 300 meter with snorkel and fins, and a ten-minute tread) though I wasn’t crazy about how cold the water had gotten after the torrential downpour of the weekend’s typhoon. Following the swim test, it was time to strap into our kits and my breathing anxiety kicked in. I brainstormed excuses. I thought about faking a cramp, or a headache, or telling them all of a sudden I felt like I had a cold. (Another rule of diving is to cancel the dive if you are congested.)

But I looked down at my rented flippers and reminded myself, “The most important rule in scuba, is to never ever hold your breath.” I repeated it like a mantra. Besides… if it turned out I couldn’t breathe through the regulator, I was going to be in exactly 5 feet of water, so I could always just stand up.

We took knees at the bottom of the pool as we worked through some of the drills. After about 30 minutes in the 72 degree water, this Gulf of Mexico-raised wimp, was shivering through her 3mm suit. I was shaking so violently that I simply forgot to worry about breathing through a regulator. On our drive home that night, I admitted that Dane had been right that I wouldn’t drown, but I still thought I might sit this one out until next summer. Never wanting to be dramatic, I told him that I intended to soak in a hot bath until I was warm again, which might take all week, so would he kindly spoon feed me lasagna if I started to waste away?

I think I knew that if I waited until next summer to try scuba diving, I would, without question, talk myself out of ever getting certified, and the truth was, it really hadn’t been that bad. So the next day I repeated my new mantra as I drove back to the dive shop and tried on a 7mm wet suit. They looked at me a little funny and the girl behind the counter told me that she had never heard of anyone scuba diving in Okinawa in a 7mm, but my mind could not be changed as I shimmied my body into almost a centimeter of neoprene. I couldn’t bend my arms or legs, but that seemed like a small price to pay for all that warmth. That night while everyone else continued to shiver in their 3 mms, I was triumphantly, albeit buoyantly, warm in my 7mm.

And would you believe it? Another night passed without any anxiety about breathing. That night I found myself dreaming about the next day’s open water dives, and not in a “wake-me-from-this-nightmare” way. I was actually really looking forward to getting out of the pool and into the sea. And the next morning… I did. And I was warm and happy and never once held my breath.